These cozies, in authentic provencal cotton fabrics fit over a french-press style coffee maker to keep your brew warm.

I’ve been working on a number of projects, most notably a series of tea and coffee cozies. It’s odd how all of this has come about. A friend admired a tea cozy I’d made and asked if I’d make him one for his 50th birthday. I did. I made a few, tweaking the pattern, experimenting with remnants of some very expensive and very luxurious fabrics that I’d had acquired through my interior design business. Through word of mouth, I was approached by someone who asked if I would make a large tea cozy to fit both her teapot, as well as her french-press coffee maker. (The glass on the french presses is thin, thinner by far than a ceramic teapot, and no sooner is the coffee ready to’press’, than its barely warm.) I thought about it and said I’d make a coffee cozy to fit the cylindrical shape of the french-press, and a tea cozy to fit her teapot.

I tried several different shapes but finally settled on the triangular tower, which looks a lot like papal headgear, as it accomodates the handle while still fitting snuggly around the glass cylinder. At some point in the process, I remembered my treasured stash of french, provencale fabric. I’d purchased it in 2001 in order to make a wedding quilt for my future husband Andrew, as well as a bedskirt. These brightly colored prints are a tradition in the South of France, which was my home for a number of years, and their charming patterns and crisp finish are cheerful, vibrant and perfect for accent pieces and tabletop furnishings. A few people had seen them and the next thing I knew two forces were at work. Requests started rolling in for similar objects, or, as the french would say, ‘confections’, and several people suggested that I open an Etsy shop. I started to give it some serious consideration and knew I needed help. Enter Sara, long time friend, computer maven, seamstress, former pattern-maker, sculptor and general renaissance woman. I hear the seraphim sing.

We’ve opened a storefront on Etsy called the Stonewell Cottage Shop, but there’s a lot to do before it’s fulled stocked and properly organized.

We’re getting ready to launch the Stonewell Cottage website (presently under construction). We’re sewing,  tweaking patterns, designing a logo, ordering fabric (finally there’s a reason to use our french), having labels made, photographing finished products, reorganizing the studio to more suitably accommodate sewing, and designing an expanded line of goods that will include kitchen appliance covers, table linens, handbags, totes, and some gardenwear.

I decided to make another handbag, with slightly reduced proportions. My intention was to make a smaller version of the first handbag, which I now call the Bella Bag. However, during the crafting of the specimen, a few things happened that surprised me. By serendipity, people around me were talking about handbags, utterly unaware that I was beginning to make them. I was surprised to learn that there are very strong opinions on structure/ organization versus minimal organization. The bag I was planning was a scaled down version of the one I’d originally produced… and would have included separate divider compartments, one zippered, one snapped, to control the chaos of what women carry in their handbags.But then, what I was hearing, was that some women wanted something akin to a structured Tote Bag…wide open spaces with plenty of flexibility. I thought about this and produced the “Sara” bag. It has structure, it has an inside pocket to house a pen, eyeglasses and a small notebook or business cards, and the exterior has a padded pocket for a cell phone,(the side that’s held snug to the body, for privacy or even ‘vibration mode’ alerts)  but the interior, with its deep red lining, is as wide open as the Grand Canyon. 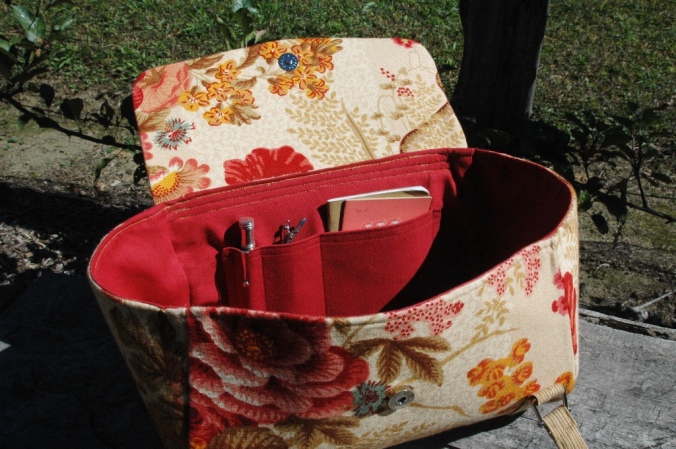 The “Sara’ Bag, named to acknowledge a dear friend and a Sadie Lou alum.

The shape and style of the bag borrows  from the classic French marketing bag; a ‘panier’ but adds a bit of style and charm with awarm, autumnal, Brunschwig & Fils patterned linen/ cotton blend upholstery weight fabric.

The public view of the ‘Sara’ bag.

Here’s the back…the part that snuggles against your ribs: 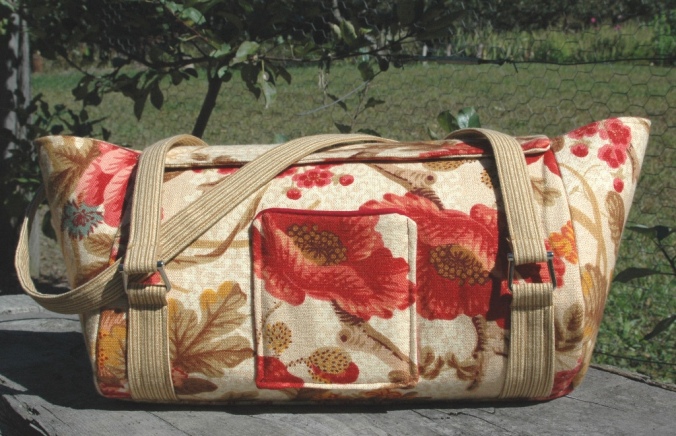 Backside of the ‘Sara’ bag.

This bag as available for purchase at my Etsy location, which is listed as: Stonewell Cottage Shop. Feedback is always welcomed!